Watching live ghost cams online is a great way to go ghost hunting without leaving the safety of your own home. These live feeds run at locations that are known to be haunted, and you can tune in with other viewers around the world in hopes of catching a glimpse of a ghost. If you see an apparition while viewing the feeds at any of the following sites, be sure to use the screen capture feature found on most sites to get a permanent record of the sighting.

Willard Library in Evansville, Indiana is one of the oldest public libraries in the state, and it's considered haunted. Its Victorian Gothic architecture is the perfect setting for a haunting. The library's website has three web cams set up. All three are displayed on the same page and refresh every 20 seconds. If you spot a ghost or unusual activity, simply click on the appropriate cam screen to capture a screenshot and then submit your photo to the website. 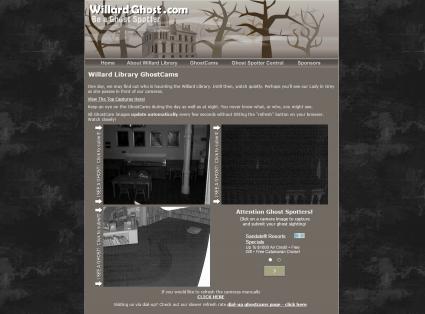 View the Willard Library ghost webcams in the following locations:

Everyone searches for the Grey Lady, who has been spotted in the Children's Room by many visitors and cam viewers. This area is the library's room for telling stories to visiting children. Be sure to visit the Ghost Spotter Central page for information about where the Grey Lady ghost might be and view screenshots that website visitors have captured of possible ghosts.

The Furman Theatre at Furman University feature a 24/7 live WebTheatreCam of the "mainstage" of The Playhouse. You can also watch the live feed from the Furman Theatre Arts Department's Scene Shop. There is a lot of non-ghostly activity going on there, but you may get lucky and catch a glimpse of a campus ghost or one of the ghost children rumored to haunt an adjoining cemetery. 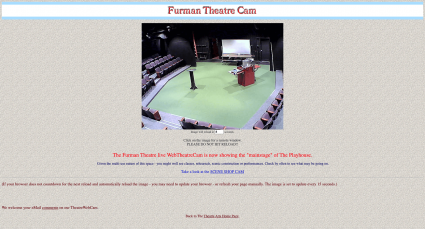 Museum of Shadows operates a 24/7 live steam. You can watch and listen to what's going on inside the museum. You're encouraged to take screenshots of any ghostly activity and send to them for evaluation. The site charges $5.99 per month to watch their livestream webcam. 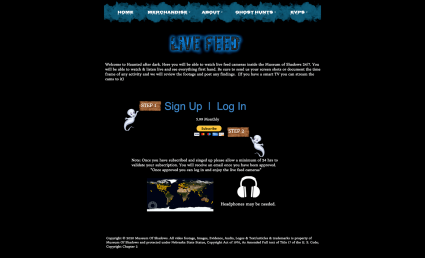 The long-running popular UK TV show Most Haunted show offers fans the opportunity to watch several live feeds at different locations the team has investigated in the past. The show charges a fee of 3 to 4£ per monthly for access to the live feed. 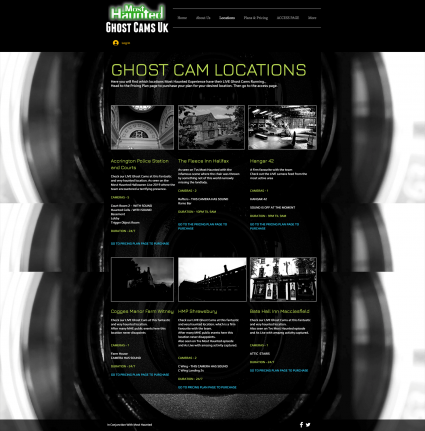 The home of the late Elvis Presley, Graceland, features a 24/7 webcam. Reports of the singer's ghost appearing in foreign lands and at his beloved home Graceland persist decades after his death. Some visitors to stately Graceland have claimed to see his ghost walking about the estate. You can watch the estate from the Graceland webcam and just maybe see the King's ghost for yourself. 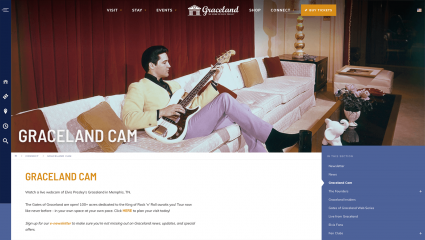 One of the most extensive web cam sites online is the mysterious Victorian house found on the dddavid's Ghost Cam website. The house is as mysterious as the owner, presumably David. He doesn't disclose where the house is located or who he is, but he does offer visitors a whopping 20 web cams set up inside and outside the house along with a few tidbits about his fellow resident. 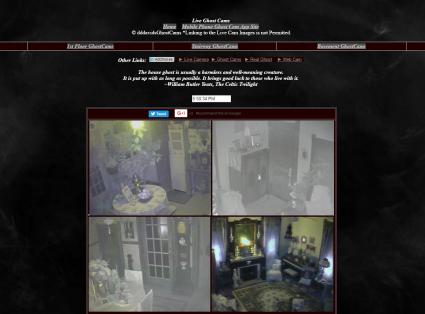 David also states that prior to moving into the home, he was doing some renovations but found it difficult. Something always hampered the project. His tools would mysteriously disappear only to reappear an hour or so later. He found that several rooms had locks on both sides of the doors. He describes the home as a "very old five-bedroom castle-like Victorian." Each room features four web cams, as does the outdoor section.

Rooms include the old nursery aka "The Cold Room," den and two bedrooms.

Four more cameras give great views of the staircase and upstairs and downstairs area.

An additional four web cams can be found outside. These are infrared night vision cameras set up in the hope of catching some of the strange activity taking place outside the house. Perhaps the property just beyond the yard, said to be the site of unmarked graves, is responsible for much of the outside activity.

Watching live ghost cameras can be time consuming and requires a great deal of patience so you don't miss a possible apparition. While there aren't many "live feed" ghost cams, those still around are greatly appreciated by aspiring ghost hunters and those interested in the paranormal.