Summer and fall in Washington State are the perfect time to lace up your hiking boots and head out for a haunted hike. If you live in or are visiting Washington and you love both hauntings and hiking, grab your backpack and some trail mix and spend a day of spooky fun.

Located in the North Cascades, the Iron Goat Trail is a rails to trails hiking trail. It was originally the rail bed for the Great Northern Railroad back at the turn of the 20th Century. Trains traveled it across hazardous and snowy Stevens Pass during the winter, an area that was prone to heavy snows and avalanches. Today, the Iron Goat Trail is what remains of the former railway, and it's a popular hike from early summer through late autumn after the deep snow has cleared.

On March 1 of 1910, the worst avalanche disaster in the history of the United States in terms of human life lost occurred along the Iron Goat Trail at Wellington, Washington. Wellington was a small railroad town located at about 4,000 feet in the North Cascades. Trains came through the Cascade Tunnel, a 2.6 mile long tunnel trains traveled to get from the east side of the mountain to the west without having to go over the summit. During the winter of 1910, a storm trapped two trains full of passengers and railroad employees at Wellington for nine days. As railroad employees did their best to clear the tracks of continuous avalanches, the trains remained at Wellington on a passing track that sat 100 feet above a creek bed below. On March 1, a lightning strike in the mountains released the snow from the hill side, which rumbled down the hill, swept the trains off the tracks, and killed about 100 passengers and railroad employees. Today, Wellington is considered one of the most haunted hiking trails in Washington State. 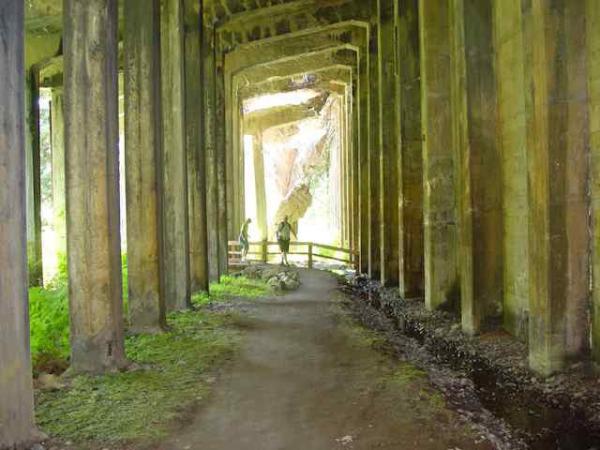 Wellington isn't the only place along the Iron Goat Trail where people have had experiences. Railroading was dangerous work, and many died, something paranormal investigators hypothesize is what causes all of the activity along the trail. People have had all sorts of experiences along the Iron Goat Trail including seeing full-bodied apparitions, hearing ghostly voices, capturing electronic voice phenomena and ghost photos, and more.

About the Iron Goat Trail

You can hike all or part of the Iron Goat Trail depending on how adventurous you feel. You can hike from the Martin Creek trailhead, which is a 6 to 12 mile round trip. The lower loop is three miles of ADA accessible trail with little elevation gain while the upper loop is a 12 mile round trip extending to Wellington. The elevation gain is about 1,000 feet, and at times you will need to skirt alongside the edge of train tunnels. However, the view when you get to Windy Point is spectacular, and it's where workers slid the bodies of victims down a rocky hillside on sleds after the avalanche. 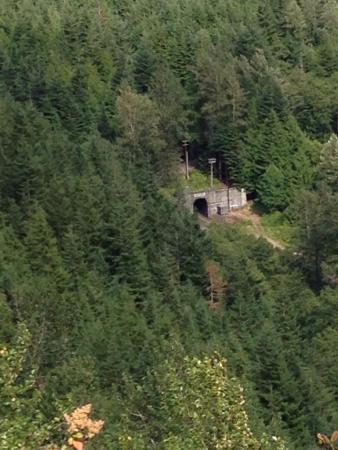 Getting to the Iron Goat Trail

Take Highway 2 to the Martin Creek Trailhead, which is on the left side of the highway coming from the west or the right side coming from the east. You can explore the interpretive center before heading out on your hike. To get to the Wellington trailhead, from the west just as you see the ski area on your right, you'll see a break in the jersey barrier to your left (there's a lighted speed limit sign over the road here). Turn through the jersey barrier and head down the switchbacks to Wellington. Take the first right turn you come to. The roads are bumpy but passable in most vehicles. From the east, turn right through the jersey barrier at the end of the ski area.

Located in Pierce County, Melmont Townsite is a ghost town that sits along the Carbon River. The trail to Melmont is about six miles round trip of railroad grade (it climbs about 100 feet). You'll need to drop down next to the Fairfax Bridge to get to the trail. It is a former coal mining town, and as you hike, you will find crumbling remnants of bridges and buildings in a peaceful and remote setting. The town was founded in 1900. In 1905, the mine foreman's house was bombed with dynamite and one of the miners was charged with the crime but acquitted due to lack of evidence. Nobody died in the explosion. The town slowly emptied after nearby mines were closed in the 1920s. 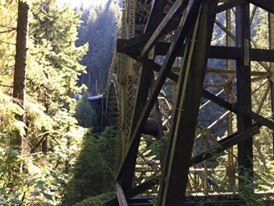 Fairfax Bridge on the trail to Melmont

Having hiked to Melmont, I (the author) saw an apparition of a young boy multiple times. He seemed to follow us and chatter the entire time we were hiking around the site. Others have reported seeing shadows and hearing voices as well as having other ghostly occurrences.

Take SR165 and park on the east side of the Fairfax Bridge past Carbonado. Cross the bridge and drop down on the Northeast side of it; there's a path here to do so. When you get to the bottom of the bridge, head to your left along the trail and into Melmont. Look for little paths off of the main trail to find various crumbling foundations of the town on both sides of the trail. 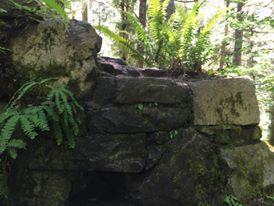 For a shorter, more gentle hike into a haunted Washington State ghost town, visit Franklin, which is located near Mount Rainier. The hike to the Franklin Townsite is about 2.5 miles round trip with some gentle elevation gains of about 200 feet. Established in the 1880s, Franklin was a coal mining town that experienced significant labor and racial tensions, leading to rioting and death. It is also the site of the worst mining disaster in King County which occurred when an arson fire in the mine suffocated 37 people (the arsonist was one of the men who died). Today, you can find an overgrown cemetery, remnants of rail cars and tracks, and building foundations scattered throughout the site. 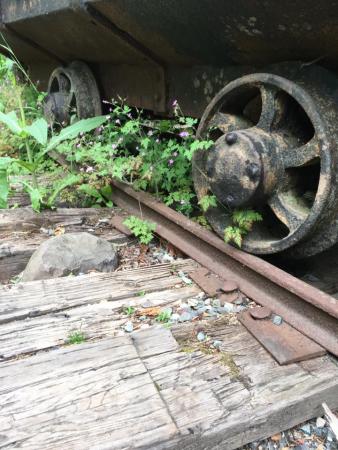 Wherever great tragedy and loss of life occurs, claims of hauntings are sure to follow. This is certainly true of Franklin. People report seeing shadows and apparitions, hearing voices, and feeling fear and dread in the area among other things.

To get to Franklin from Seattle, take I-90 and turn right on Highway 18. Exit at SE 231st Street and turn south on SE 231st Street. Take Maple Valley - Black Diamond Road SE for about 6 miles. Go left on Lawson Street. There's a private field for parking, which costs $5 (it's on the honor system). 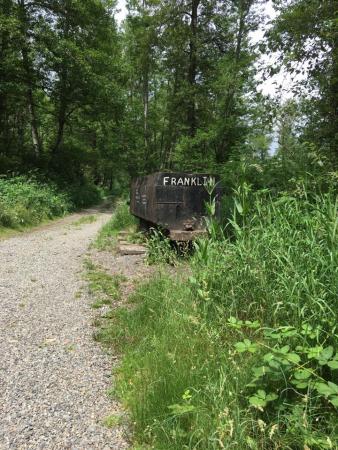 Other Haunted Trails in Washington

Try out some of these other reportedly haunted trails.

Take a hike to explore haunted Washington State. Always double check conditions before you go, especially with trails in the mountains where snow may block your way several months out of the year.