The road trip starts in historic Port Townsend on Washington's Olympic Peninsula. The small, charming seaport town is packed with adorable and historic Victorian style homes, funky restaurants, quaint shops (including plenty of crafts and antiques), and lots of haunts. 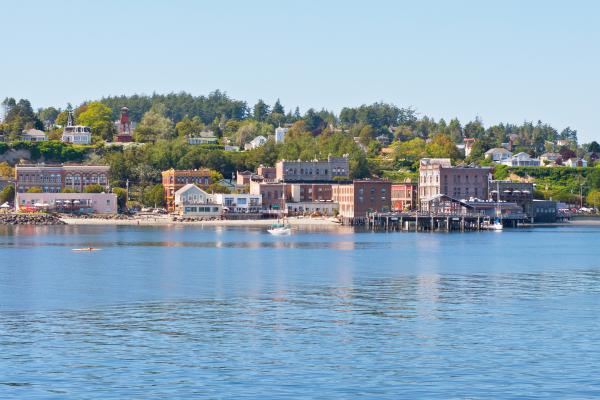 How often do you have the opportunity to stay in a castle? Manresa Castle is located at 651 Cleveland Street in Port Townsend. Built first as a private home and used later as a Jesuit college, the castle has beautifully appointed rooms, plenty of ambience, and ghosts. Alternatively, you can stay at the boutique Palace Hotel located at 1004 Water Street. With just 15 rooms appointed in Victorian luxury, you'll love the ambience as well as the haunts. 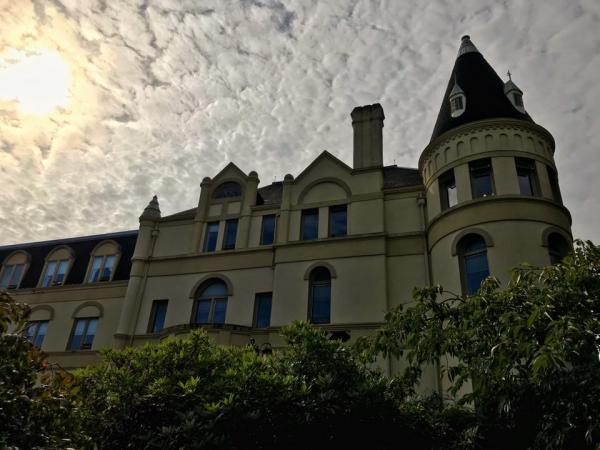 Looking for a great meal in a historic (and possibly haunted) building? The Old Whiskey Mill at 1038 Water Street is situated in the historic Kuhn's White Block built in the 1890s. With a classic menu (poutine, burgers, steaks, pasta), and plenty of whiskey, you can't go wrong. And while the Old Whiskey Mill has plenty of spirits (bourbon, whiskey, rye, Scotch), does it also have spirits (ghosts)? Although it's not known for paranormal reports, the building's history alone makes it worth a visit.

There's plenty to see and do while you're in Port Townsend from browsing the charming downtown shops to heading out on a ghost tour to explore the city's most notorious haunts.

When you're ready to leave Port Townsend, head to the ferry dock at 1301 Water Street and take the short ride on the ferry across to Keystone on Whidbey Island.

From the Keystone Ferry Dock, drive the 10 miles to the Captain Whidbey Inn, a historic inn on Penn Cove where you can stay for a night or two. The inn is located at 2072 Captain Whidbey Inn Road in Coupeville. It was built in 1907, and it has rooms in the main structure and along the lagoon as well as small cabins on the cove. The hotel is equal parts historic, filled with ambience, and haunted. You can also eat on site in the restaurant, which has limited hours Wednesday through Sunday for lunch and dinner.

While you're on the island, plan a day to explore Fort Casey State Park with its haunted reputation and abandoned bunkers, armament storage, and lighthouse. It's located right next to the Keystone Ferry Dock (where you get off the Ferry from Port Townsend). Wear sturdy shoes and bring a flashlight. There's a lot to do here, and you can tent or trailer camp if you wish. Next, head to Ebey's Landing. The National Historic Reserve is located just three miles and a six minute drive from Fort Casey on Ebey's Landing Road. It's the sight of Whidbey Island's first settlement, and the difficult and sometimes violent nature of settling the island may have left behind some energy that gives the area a haunted reputation. 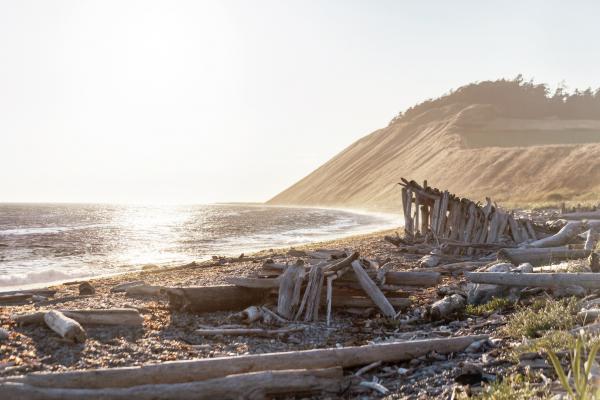 After your stay at Captain Whidbey's, head out on WA 20 through Oak Harbor (there's a huge naval airbase located there, so you may see and hear some planes flying overhead). After a 30-minute drive, you'll arrive at Deception Pass. Be sure to stop. Frequently shrouded in fog, Deception Pass is beautiful and possibly haunted. If it's a nice day, spend some time exploring Deception Pass Park, as well. Then, continue heading east into the Skagit Valley, which is a farming community known for its gorgeous tulip fields that bloom in early spring. 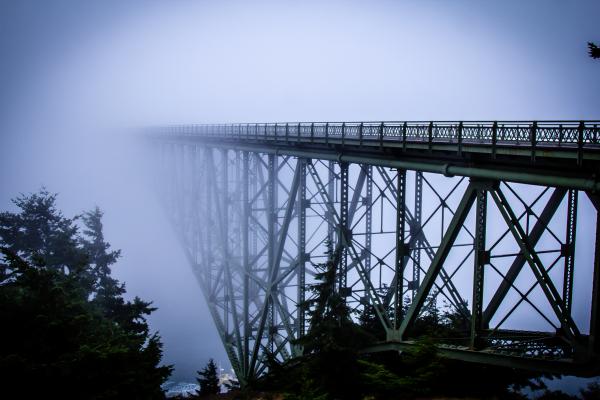 A 42-minute drive from Deception Pass brings you to the haunted Stanwood Hotel and Saloon located at 26926 102nd Avenue NW in Stanwood. The rooms in the century-old hotel are recently remodeled but filled with carefully chosen period pieces to protect the ambience. The saloon offers food and beverages along with atmosphere, history, and spirits.

After exiting Deception Pass, you'll go through the town of Anacortes. Stop there and visit the haunted Anacortes Museum located at 1305 8th Street in the Carnegie Library in Anacortes. It's open Tuesdays through Sunday. About a 30 minute drive north from Stanwood, you can visit the charming seaside town of La Conner. Along with some fun shops in the downtown corridor and interesting houses and buildings, stop by Gaches Mansion, currently known as the Pacific Northwest Quilt & Fiber Arts Museum. It's located at 730 South Second Street in La Conner and is open to the public Wednesday through Sunday. Along with fiber art displays and quilts, it also has a haunted reputation. 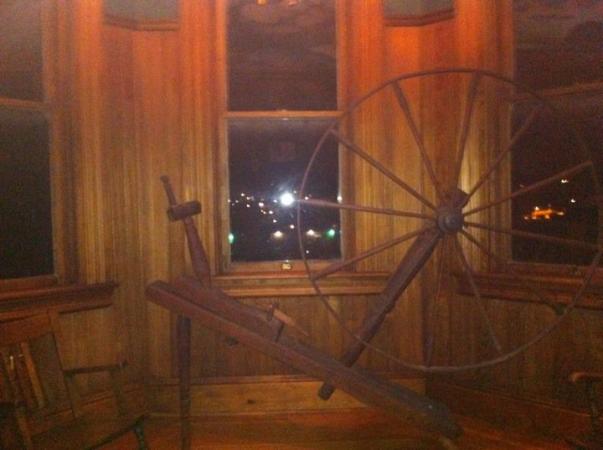 For those who like to hike, take a trek through the Northern State Recreation Area. The trailhead is located on the North Cascades Highway (Highway 20) near Sedro Wooley, WA. It's about a 5-mile round-trip walk with only a slight elevation gain, but you'll arrive at the former Northern State mental hospital, which has a famously haunted reputation.

From Stanwood, head south on Interstate 5 (I-5). It's about an hour drive; longer if you hit traffic, which you likely will if you're traveling weekdays between 6 AM and 10 AM or 3 PM and 6 PM. Seattle is notorious for its heavy rush hour traffic volumes.

Located in downtown Seattle at 900 Madison Street, the Hotel Sorrento is a boutique hotel that's been a favorite of celebrities visiting the area. It's also a well-known haunt, so it's a great place to spend the night while you're in Seattle. 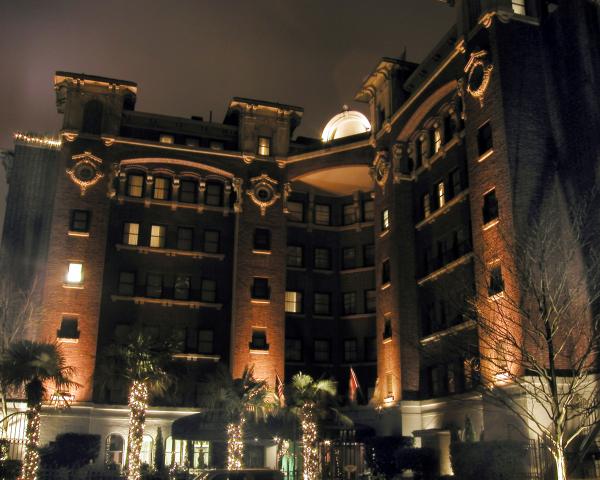 Located in another of Seattle's famous haunts, Pike Place Market, (1916 Post Alley), Kells is such a well-known haunt it appeared on the show Ghost Adventures. It's also a former mortuary, so there's that.

While You're in Seattle

It seems you can't throw a rock in Seattle without hitting a haunted location. Here are some highlights.

From Seattle, head south on I-5 once again until you get to its neighboring county, Pierce County. Do some sightseeing in Tacoma (it's about an hour drive), stopping in at the Museum of Glass (not because it's haunted, but just because it's cool), and check out some of the other attractions in the Museum District. When you've had your fill, head back south on I-5 for a short drive to Thornewood Castle, which is just south of Tacoma.

Located on American Lake at 8601 N. Thorne Lane in Lakewood, Thornewood Castle is a beautiful bed and breakfast with sumptuous rooms, well-manicured grounds, and a haunted reputation. It was built a century ago from the pieces of a 400-year-old English castle. It was the setting for the Stephen King movie Rose Red, which may be where it gained its haunted reputation, although many who have visited have reported paranormal experiences.

While you're in Tacoma, dine at the haunted Alfred's Cafe located at 402 Puyallup Avenue in Tacoma. It's a casual dining restaurant with simple food and a good reputation.

While in Pierce County

Thirty minutes to an hour south along I-5 once again brings you to the neighboring counties of Thurston and Lewis. Thurston County is home to Washington's state capitol, Olympia. It's worth visiting the capitol grounds for both their ghosts and the over-the-top architecture. The governor's mansion is one notoriously haunted location there, although it's a private residence. You can walk by it, however, and get a sense of it. 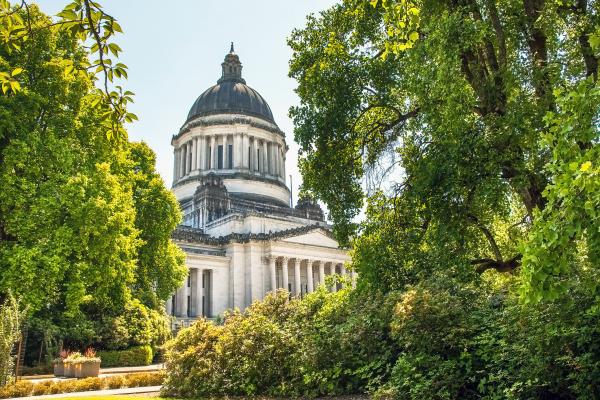 Head 25 minutes South from Olympia and spend the night in historic downtown Centralia at the McMenamin's Olympic Club located at 112 N. Tower Avenue. It has European-style lodging (bathrooms down the hall), a fun, affordable pub with some of the best tater tots anywhere, and a cozy theater where you can snuggle up on a couch with a loved one, a beer, and some food to watch a movie. Centralia is also the location of the Armistice Day Massacre which occurred in 1919. Many attribute the town's multiple hauntings to this event. If you like antiques, stroll the streets to visit the many antique stores (many with haunted reputations) and art galleries.

While you're in the area, there are plenty of haunted locations to visit. 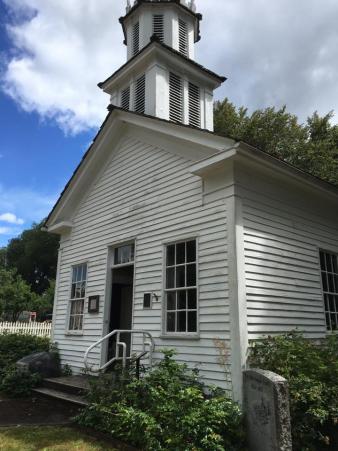 From Lewis County, head south on I-5 once again to the Vancouver, Washington and Portland, Oregon metropolitan area. There are many haunted places in Oregon, so you can continue your road trip or end here.

Located in downtown Portland at 1001 SW Broadway, the Heathman Hotel is frequently listed as one of America's most haunted hotels. It opened in 1927, and guests and staff have reported haunted happenings for decades.

Head across the bridge to Old Fort Vancouver for a meal at the Grant House Restaurant, a restaurant located in a historic home at 1101 Officer's Row in Vancouver. The food is good, the ambience is even better, and the reputation is haunted. 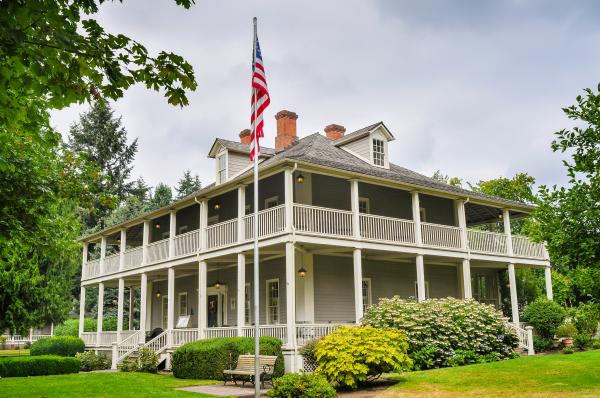 While in the area, visit the following haunted places.

Queue up Your Playlist

Next time you're ready to hit the road for a haunted road trip throughout the Pacific Northwest, queue up a great ghostly playlist (Haunted by Evanescence and If I Ever Leave This World Alive by Flogging Molly, for example) and head out. Whether you just make a few stops or head even further down into Oregon and California, you're sure to have a great - and spooky - time.