What is it about time spent sailing the high seas that contributes to so many ships being haunted? Perhaps it is their proximity to water or the camaraderie that develops because sailors spend so much time aboard but whatever the reason, haunted ships have a mystique all their own. This California road trip of haunted ships (plus a few extras farther north for intrepid travelers) will give you plenty to explore.

Start your road trip at San Diego's Embarcadero with a visit to the San Diego Maritime Museum. The floating exhibit includes tall sailing ships, submarines, and one of the most beautiful ferry boats you'll ever see, and it's within walking distance of the USS Midway, an impressive Navy aircraft carrier that now serves as a museum.

Hauntings Aboard the Midway

While the Midway hauntings aren't widely reported, the San Diego paranormal community knows otherwise. Investigators believe they have come in contact with numerous spirits aboard the Midway, which spent 47 years on the sea seeing action in Vietnam and Operation Desert Storm. 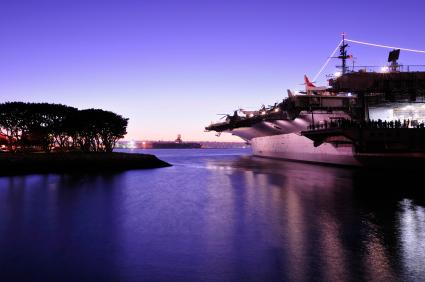 Ghosts of the Star of India (Euterpe)

Located in the Maritime Museum, the Star of India (formerly the Euterpe) is billed as "the world's oldest active sailing ship." Commissioned in 1863, she still goes out today for trips on the San Diego Bay. Over the years, Star of India has played multiple roles as she's circumnavigated the globe 21 times sailing trade routes to India and carrying emigrants to New Zealand. 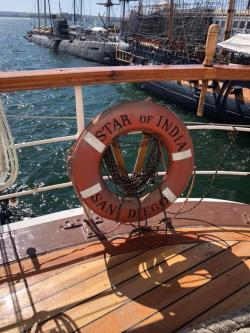 Life aboard the Star of India was brutal and hard, and the ship was often packed to the gills with lots of people sharing limited provisions. Because of this, the Star of India has seen mutiny, accidents, violence, and death, and that energy remains aboard. Nicole Strickland, paranormal investigator and author of San Diego's Most Haunted notes, "The San Diego Paranormal Research Society has conducted official research investigations onboard the Star of India and has come away with both intriguing personal encounters and captured ghostly evidence. Disembodied vocalizations and EVP captures have been documented by many paranormal researchers."

Spirits of the Steam Ferry Berkeley

Although not technically a ship, the Steam Ferry Berkeley is another haunted boat at the Maritime Museum. Commissioned in 1898, she ferried passengers to safety after the 1906 San Francisco earthquake. Docked in San Diego since the 1970s, the Berkeley is now part of its floating museum serving as a gift shop and events center. While aboard the Steam Ferry Berkeley with Strickland, I (the author) saw an apparition of a woman in a muslin gown on passenter deck, and others have reported seeing figures and hearing voices and footsteps, as well. 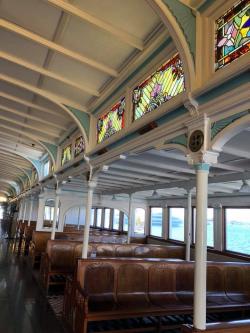 Visiting the Midway and Maritime Museum

The Midway stands separate a short walk from the Maritime Museum at San Diego's Embarcadero at 910 N. Harbor Drive. Tickets for the Midway are about $18. Hours are 10 AM to 5 PM. Just a short walk (or pedicab) away at 1492 N. Harbor Drive, you'll find the Maritime Museum. The first ship you come to is the Star of India and the others are all docked nearby. Admission is about $18 to view all boats and ships including a swift boat and two submarines, and the museum is open from 9 AM to 9 PM in the summer and 9 AM to 8 PM the rest of the year. Plan to spend an entire day (or more) exploring the haunted ships of San Diego. You can spend the night at the haunted Hotel del Coronado, a beautiful and historic hotel with Hollywood ties (Some Like It Hot was filmed there) which sits oceanside just across the Coronado Bridge.

In the morning, take the two-hour drive from San Diego, heading north along Interstate 5 or the Pacific Coast Highway to Long Beach where you'll find the Haunted Queen of the Seas, the RMS Queen Mary. Now serving as a luxury hotel and museum, you can spend the night in one of her staterooms or suites and dine in a restaurant to get the full Queen Mary experience. An overnight stay is strongly recommended, as it will give you plenty of time to explore the ship and take one of her haunted tours. 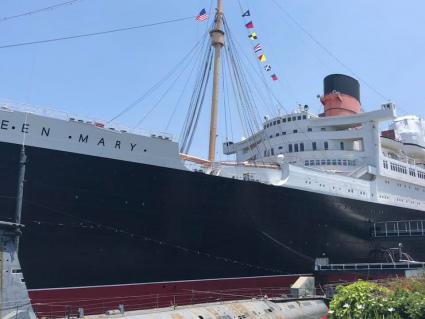 Strickland, who has written three books about the RMS Queen Mary says, "Born to reign upon the seas, the RMS Queen Mary is a testament to British shipbuilding. In both war and peace, her career has stood out more than any other liner." The Queen Mary embarked upon her maiden voyage as a luxury transatlantic ocean liner in May of 1936. Along with serving as a luxury liner ferrying luminaries such as Winston Churchill and Hollywood elite like Clark Gable and Audrey Hepburn across the sea, she was also conscripted as troop transport during World War II.

Ghosts of the Queen Mary

According to Strickland, "In addition to all the work she's accomplished for humanity, the Queen Mary is also coveted as being one of the most haunted places on earth." Strickland has conducted both historical and paranormal research on the ship for many years. One of Strickland's most memorable experiences occurred in boiler room #3 while on a paranormal investigation. Out of her peripheral vision, Strickland noticed a young man standing off to her right. She immediately recognized the apparition as J.P., the 18-year-old fireman and bilge cleaner who tragically perished in the after engine room's water-tight door #13 on the starboard shaft alley side. As Strickland intently looked, she saw the spirit of J.P. float toward her with a smile on his face. He manifested for about a second before fading. Strickland has said that this encounter was one of the most profound experiences she's ever had aboard the Queen Mary. She notes, "Indeed, the Queen Mary is a paranormal researcher's Mecca; 81,237 tons full of ghosts, spirits, disembodied vocalizations, shadow figures, psychokinetic energy, phantom smells and footsteps, and apparitional sightings. Many people have visited the iconic vessel as skeptics and have disembarked as true believers in the paranormal." 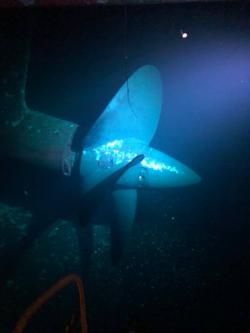 You can stay aboard the Queen Mary, visit her restaurants or bars, browse her exhibits, or take one of her historical or haunted tours. She's located at 1126 Queens Highway in Long Beach, and costs and hours vary depending on what you're planning on doing while you're there.

After your night aboard the RMS Queen Mary, hop in your car and head north for the short drive to the USS Iowa, located in Los Angeles. The ship launched in 1942 and was known as the Battleship of Presidents because it carried US president Franklin Delano Roosevelt to meet with Winston Churchill and Joseph Stalin in 1944. The battleship served for nearly 50 years in World War II and the Korean Conflict. In 1992, it also saw tragedy as a gun turret explosion killed 47 soldiers. 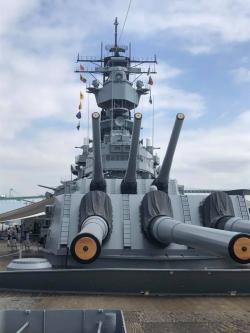 Ghosts of the Battleship Iowa

Many people believe some of the men killed in that explosion remain aboard the ship, which is now a floating museum. People have reported seeing sailors in their dress blues and hearing footsteps and voices.

The Iowa is a floating museum located at 250 S. Harbor Boulevard in Los Angeles. It is open daily from 10 AM to 5 PM. Docents are available throughout the ship, and many are former Navy. If you're former military, check in when you board to be welcomed aboard via loudspeaker, a nice way to acknowledge those who have served. Tickets are about $20, and you can buy them at the ship. While in Los Angeles, spend the night at the historic and haunted Hollywood Roosevelt Hotel.

If you're up for longer road trip and you're not opposed to leaving the state, you can head into Northern California, pass through several of Oregon's haunted locations, make your way to Washington State. Along the way, you'll find two more haunted ships.

It's about a six hour drive time from Los Angeles to Alameda. There, you'll discover one of the most haunted ships in the country, the USS Hornet. The Naval aircraft carrier now serves as a floating museum. Commissioned in 1943, the Hornet spent time in the Pacific during World War II and was retired in the 1970s. Visitors and crew report extreme, frequent, and varied paranormal activity including poltergeist like movement of objects, conversations with full-bodied apparitions, and much more. The Hornet is located at 707 West Hornet Avenue in Alameda. It's open daily (except Tuesday) to visitors, and tickets are about $20. While you're in the area, check out other haunted locations, such as Alcatraz in San Francisco, the Winchester Mystery House in San Jose, and the Moss Beach Distillery in Moss Beach. Spend the night in San Francisco's haunted Queen Anne Hotel before returning to your home base or taking the drive up through Oregon and Washington. 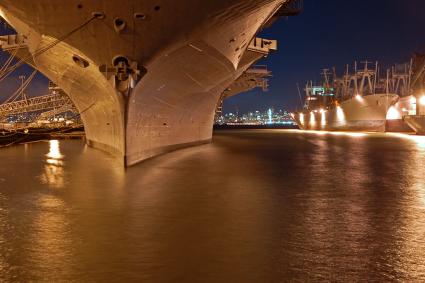 The drive from Alameda to Bremerton, Washington isn't for wimps. It takes about 13 hours but if you're feeling truly adventurous in your travels, there are plenty of haunts to see in Oregon before you arrive in Bremerton, which is the home of the USS Turner Joy. The ship is a Vietnam-era destroyer that now serves as a floating museum. Along with seeing action in Vietnam and the Korean Conflict, the ship experienced a gun turret explosion that killed five sailors. 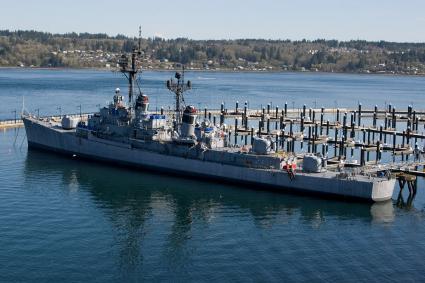 Many have had experiences aboard the Turner Joy including the author. I have heard footsteps and voices and footsteps and seen a full-bodied apparition of a sailor up in the Captain's stateroom. Likewise, I recorded electronic voice phenomena near the gun turret that exploded giving the name of one of the sailors killed in that incident.

The Turner Joy is located at 300 Washington Beach Avenue in Bremerton. Admission is about $18, and the museum is open for self-guided tours 7 days a week from March through October and Wednesday through Sunday November through February.

If you're a fan of haunted locations, then you can't beat a road trip to visit haunted ships (and other haunted locations) along the West Coast. Strickland notes, "All ships have a soul that speaks about their historical past to those residing in the present. It is for this reason that many ships are said to have spiritual energy." So next time you're in California itching to take a road trip, visit the haunted ships and you just may experience the paranormal.